Cogent bits of Henninger’s column: The central feature of Mr. Obama’s rewrite of what one might call the Founding Fathers’ original vision has been to abolish Congress. Yes, the 535 men and women elected to Congress still show up at the old Capitol building, as they have since November 1800. But once past passage of ObamaCare and Dodd-Frank, the 44th president effectively retired Congress from its historic function. If you put the president behind the wheel of a car in front of the White House to visit Congress, he’d probably get lost.

“Obama’s power grabs” is Republican boilerplate. Voters don’t care about power grabs. But most voters, perhaps including many pre-2008 Democrats, still care about being represented in Washington as defined by the first Founding.

Yesterday, the Democratic Party, the oldest political party in the world, the party that guided this country through two world wars and is more responsible than any other for the shape of the modern American state—the Democratic Party’s leading and prohibitively favored front-runner candidate for the presidential nomination announced four goals for her public life going forward. One of which is to amend the Bill of Rights to make it less protective. It’s an astonishing event. She said that she wants to change the First Amendment in order to further empower the political class to regulate the quantity, content and timing of political speech about the political class—and so far as I can tell, there’s not a ripple of commentary about this in the stagnant waters of the American journalistic community.

Well, the belief that the First Amendment is a mistake and that the real right that people have regarding speech is the right to avoid speech that annoys them. The column that got me here tonight, for which I am grateful to admit, contained the following sentence, and this is the one that got me into trouble. Roger mentioned it. I said: Colleges and universities are learning that when they say campus victimizations are ubiquitous and when they make victimhood a coveted status that confers privileges, victims will proliferate. And to ensure that they proliferate, we have amended the doctrine of micro-aggressions and to the idea that one has an entitlement in our entitlement society to a cocoon of serenity everywhere.

Well, as proof of this, I give you the following: I mentioned the Princeton Graduate School. No one at the Princeton Graduate School pays a dime of their expenses. They are by any measure the top one one-thousandth of one percent of the most privileged people who ever lived on this planet. And a few of them, the Black Graduate Caucus, the Latino Graduate Student Association, and Graduate Women of Color recently sent the following protest note to the Princeton administration because Princeton has shuffled their diversity and multicultural and sensitivity bureaucracy by adding two new people. Their protest said this: Princeton University has deepened the anguish and intensified the alienation of its graduate students of color. Stop laughing this is serious business. Students of color are constantly besieged by the racism at Princeton. Surviving Princeton for students like us is more than a struggle. It is a battle for one’s life and sanity for the dignity of one’s nonwhite flesh. 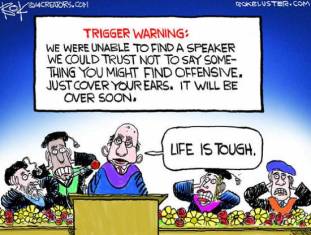 This premier event is meant to celebrate those who have been “dis-invited” from speaking on college campuses in recent years- all because the left wing-nuts of the faculty or student body didn’t want others  to be able to hear an alternative point of view. The recent practice of silencing opposition is otherwise known as CENSORSHIP, INTOLERANCE, and CLOSED MINDEDNESS. Way to go, lefties. FYI: The freedom of speech isn’t just for you! Oh, yeah…Trigger warning!!

One more thing from George Will: The Speech Every 2015 College Grad Needs to Hear from Prager U.

Experience teaches us: in order to know oneself well and develop harmoniously, a human being needs the reciprocity of man and woman,” said Pope Francis.  “When that is lacking, one can see the consequences.”Those consequences fuel confusion and error, said the Pope. “For example, I ask myself, if the so-called gender theory is not, at the same time, an expression of frustration and resignation, which seeks to cancel out sexual difference because it no longer knows how to confront it,” he said.  “Yes, we risk taking a step backwards.”

“The removal of difference in fact creates a problem, not a solution,” said Pope Francis.

Seeking to change or dissolve the complementarity between man and woman produces intellectual, social and spiritual darkness, the Pope continued.  “God entrusted the earth to the alliance between man and woman: its failure deprives the earth of warmth and darkens the sky of hope,” he said in his April 15 audience.

The order established by God between man and woman and creation is the key to harmony, said the Pope. 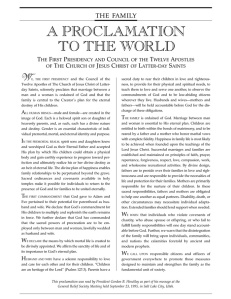 sponsibility of the Church, of all believers, and first of all of believing families, which derives from us, impels people to rediscover the beauty of the creative design that also inscribes the image of God in the alliance between man and woman,” said the Pope.

He continued, “The earth is filled with harmony and trust when the alliance between man and woman is lived properly. And if man and woman seek it together, between themselves, and with God, without a doubt they will find it. Jesus encourages us explicitly to bear witness to this beauty, which is the image of God.”

My own faith said something quite similar in “The Family: A Proclamation to the World” in 1995.

That’s all for now, I suppose. More later.