Sometimes Facebook gets these posts before I have time to replicate and expand here. It has been a nutty week, during which I was bitten by a nasty little dog and walked out on a job. Since it has been so long between my last post and my new slew, last I was writing I was a homeschooling chauffeur to my two girls. Well, the oldest went off to university and the youngest ended up in private school. Oh, yeah, I 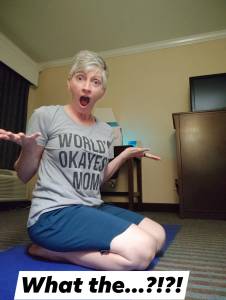 From my July 14, 2019 Facebook post; made as I was starting my roadtrip to pick up Blondie at college:
Yes, I’m going to bed early, but I brought my oil diffuser & yoga mat for a reason. Seriously, this crap is why I need alone time at least once a year. I get so…self conscious & I just can’t work out or fully relax at home. But stick me in a quiet box 200 miles away, & I’m set.
I have not done child’s pose or whatever this one is (blanking) without major discomfort in 5+ years due to the nerve dead zone & still torn meniscus in my right knee from a car wreck. The nerve area still makes me twitch when too much pressure is placed on it, but maybe it’s the yoga mat on a somewhat cushioned hotel floor vs a hard wood gym surface that made it feel ok this time. Seriously shocked.
Yoga session over. Now for corpse pose. I shouldn’t last long…

noted that in my first post back… What I didn’t mention is that I had to restart my old faux & mural business in order to pay for Brownie’s private school. More about that later though.

I made it to yoga class tonight! It has been years since I taught yoga, and honestly, in the past that has been the only way I could actually DO yoga. Teaching gave half my ADHD-riddled brain something to do so the other half could actually be calm and relaxed. Mine and Blondie’s March 2015 car wreck that took out my right knee greatly curtained (almost fully nixed) my yoga, stretching, exercising these last 5 years.

Minus a year in which I tried to enjoy cycling (blech!), but failed, and the 3 months 3 years ago I Krav Maga’d with Brownie (we moved and it got really inconvenient to go), post wreck recovery, my exercise routines went from hour to two hour racewalks and twice a week boot camps, to boring neighborhood strolls where I listened only to podcasts, never to music, because music would make my heart ache and my legs long to sprint. Stretching just to stretch became a rarity, too.

Truly, I really didn’t need the help from the airbag, as I had had surgery on the same meniscus a mere 7 months earlier, and had torn my left hamstring at the origin -for the third time (an annual event since January 2013!)- a week prior. But there you go: another of life’s blindsiding curve balls.

Fast forwarding from the injuries of 2015 to this summer, with 50 birthdays looming and my flexibility diminishing, I determined to get back to yoga, and maybe, eventually, back to teaching. To start on that path, I took my mat with me on my annual summer trip to retrieve Blondie from university and did some work each night in my hotel. Just prior to my departure a new Roll Out yoga studio opened just outside of my neighborhood. I was over joyed…though it took nearly three months for a sufficient break in my schedule to occur, allowing me to sign up for a two-week trial membership.

So far, I’ve been to three classes and, as I just signed up for an “unlimited October,” I’m looking forward to many more. My body is certainly sore, but that’s not unexpected. It feels “right” to be back on the mat, and to find that my body hasn’t lost quite as much as I’d feared. What I’m most pleased with, however, is that I’m more focused compared to the me that used to teach (more on that later)- and I think I’ve found my tribe, as it were, within yoga (not too Zen/ hyper-hippie spiritual, not too anal about their classes, chanting, practice, or music). All of this makes me a happy, still quite bendy, camper!